Archive for the tag “Toast”

A Farewell “Toast” with Great Friends!

Some of you (friends and family) may know that I am planning to relocate from the greater Detroit area to the greater Milwaukee area soon. I’ve accepted a fantastic new position, and I’m really excited about this new opportunity. At the same time, I’m bummed to be leaving some really great friends behind in MI. I know that we’ll end up meeting up somewhere – MI, Chicago, Milwaukee, or some other “road trip” location TBD. But, that still means I won’t get to see these friends as frequently as I’d like. 😦

That said, two of my closest friends here in Michigan (whom I’ve written about before – here, here, here, and here, and who wrote a guest post for me) invited me to brunch this morning. We were to meet at Toast in Ferndale at 11AM this morning. I arrived a bit early and gave my name to the hostess – twice, as she neglected to write it down the first time (and it turns out, the second time too).

After Bryan and Jessi arrived, we caught up a bit outside of the restaurant. It was a rainy morning, but it was still warm enough to stand outside. We waited for 30 minutes before Bryan’s name, not mine, was called. The hostess simply dismissed the fact that my name had never been added to the list. I had been there for ~45 minutes at that point, and was not impressed by the “service” thus far, but was famished and ready to eat! Whatever. Moving on…

Once inside, we were promptly greeted and had our drinks delivered. Then, we were swiftly ignored for several minutes. Again, the service…not impressive.

Once the server came back to take our order, we couldn’t rattle off our choices quickly enough! I started by proclaiming that I couldn’t decide between the breakfast burrito , a standard on the menu, and a special item: Thai style Eggs Benny. The combination of flavors just sounded divine to me, but I also love a good breakfast burrito! 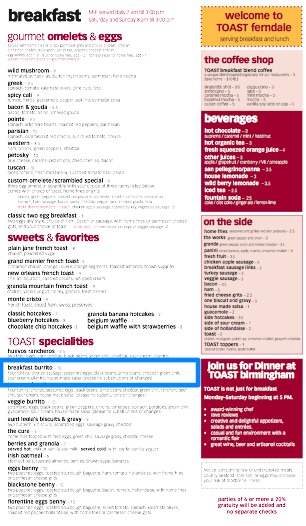 Breakfast menu Toast. It’s an “eye chart”, but you get the gist! The breakfast burrito consists of

The server quickly responded that the special is fantastic, so the special was what I would have. Jessi ordered the standard Eggs Benny, and Bryan ordered a custom omelet – both with grits. The server ended up choosing home fries for me, though I would have welcomed the opportunity to have grits again!

We continued to catch up while waiting for our meals. Considering how crowded the restaurant was, they didn’t take too long to be delivered. 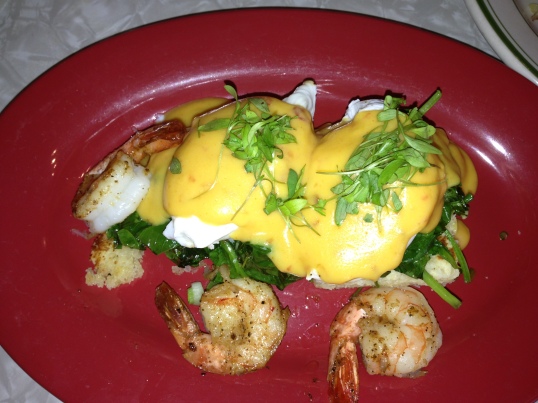 And, when I bit into my Thai style Eggs Benny, I knew I had made a good choice. The coconut biscuits had a subtle flavor, but were a cool compliment to the (semi) spicy red chili Hollandaise. I love having spinach on my breakfast foods, and it worked really well in this dish. And, the grilled shrimp (3 of them) gave another bit of much-needed morning protein and Omega 3 fatty acids.

I’m not usually a fan of potato chunks at breakfast. I prefer hash browns. However, the potatoes had a nice flavor to them, and I enjoyed several bites.

Bryan and Jessi had been to Toast before, and based on their prior experiences, we had we had talked about having brunch here before. I was glad we finally made good on that plan!

I was quite pleased with my breakfast, as was Jessi with hers. But, Bryan was disappointed with his, and from my view, rightfully so. His eggs were not tasty (they looked overcooked to me), and he said the chicken apple sausage lacked any apple flavor.

Sadly, even our attempts to cheer him up didn’t work. He didn’t really share the enthusiasm about mine or Jessi’s meals when we shared a bit with him. The Hollandaise fell short in his opinion (and he is an informed foodie!). He did admit that the red chili flavor was the upside of my dish (I agree!).

It was a bummer that his food wasn’t very good, since he and Jessi had always had fabulous experiences at Toast before. And, Toast’s reputation is quite good! Still, Jessi and I continued to dig into our meals!

My personal biggest disappointment with our brunch experience was with the lackluster service. Despite that, having leisurely brunch together at a new place (for me!) was a perfect way to spend a Sunday morning.

I’m going to miss having the opportunity to catch up with these two on a regular basis. Distance (aka: absence) will make the heart grow fonder – and will increase our already over-the-top texting conversations! Thanks for a lovely morning of catching up over brunch.