Archive for the tag “nfl”

Friday nights at my parents’ house generally means going to Yours Truly restaurant for dinner.  I happened to go there for lunch with a friend of mine today, so I politely opted out of dinner there tonight.

I had an ulterior motive as well – it’s NFL Draft night (round 2), and a handful of my Clemson Tigers are due to be drafted!  (as I write this, both Andre Branch and Dwayne Allen have been picked by the Jaguars and Colts, respectively)

So, my mom suggested that we order sandwiches and stay home – to enable my addiction to the Draft.  We called dad, asked him to pick up sandwiches, chips, and wine (duh!), and he happily obliged!  He planned to go to Jersey Mike’s and asked what kind of sandwich I wanted, and then asked if I wanted him to surprise me.  You see, he spent part of last night reading my blog, so it was fresh in his mind!  I gave him some guidance, but also told him he could take liberties and surprise me.  So…

I ended up with a turkey sub on wheat bread, with tomatoes, pickles, banana peppers, lettuce, mustard and provolone. 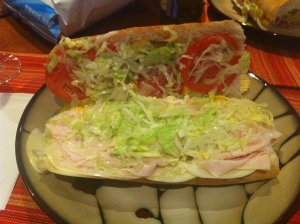 Let me say that Jersey Mike’s makes a pretty darned good sub!  I only wish they had avocado (and that’s probably because I JUST returned from the west coast, where avocado is abundant).

Dad did well with his choice.  Perfect Draft food!  Except for the fact that it filled me up too much for me to enjoy leftover Buffalo Chicken Dip, which I made for the 1st round viewing “party”.

If you’re on the east side of Cleveland, and looking for a decent sub sandwich – give Jersey Mike’s a try.  And, perhaps let the person behind the order (or counter) serve up a bit of surprise. 😉