Archive for the tag “Montreal”

Typically when I travel for business, I don’t have much time to really enjoy touring the cities I’m in. This trip was no different.

On Monday I flew from Milwaukee through Detroit to Montreal, arriving at 1:30AM. I flew out of Montreal through Detroit to Cleveland on Tuesday afternoon. I left Cleveland for Miamisburg on Wednesday afternoon and left Miamisburg to stop in Cincinnati on Thursday before flying out to Milwaukee on Thursday evening. There was not much time to see anything but the inside of airports and rental cars, folks! I was fortunate enough to have a meeting less than five miles from my parents’ house, so I did get a chance to say hi to them while staying overnight at “home”.

At least in Montreal we had time to stop for a local lunch prior to heading back to the airport. My colleague loves Smoke Meat Pete’s because of the food, and because of the live blues music they have in the evenings. 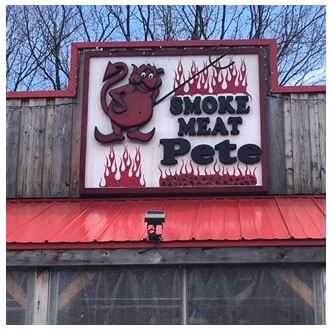 Since this was a lunch stop, no live music, but still plenty (I mean plenty!) of good smoked meat! (it was tough to get a photo of the stage because of the sunny glare coming in through the windows, but here it is…) 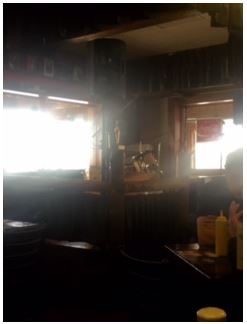 In case you’re not familiar with it, smoked meat is a type of kosher-style deli meat product made by salting and curing beef brisket with spice, either “lean” (my preference) or regular and served as a platter or on a sandwich. I had asked the man behind the counter suggest his favorite menu item for me – whoops! He had “recently decided to become a vegetarian” (an interesting choice for working at a joint known for its meat!), so he couldn’t make a personal recommendation. Fail.

However, he did recommend the “Pete’s Special” which is a smoked meat sandwich with yellow mustard, french fries (frites) and cole slaw (salade de patates – vinegar based). It was a LOT of food, and it wasn’t healthy (evenly “lean cut”), but it was a tasty indulgence. (much like a REALLY GOOD corned beef deli sandwich is) 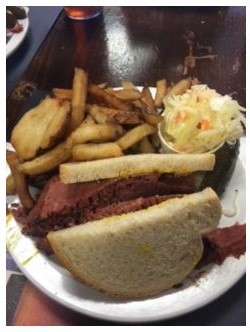 The meat was thicker than I thought it would be for “lean cut”, but I forgave it because of the flavor! It’s also one of those sandwiches that has to be (at least partially) eaten with a fork.

And, those fries… so good! Real cut potatoes, perfectly fried to heavenly perfection!

As any great joint has, here is the ever-present “neon sign”!

And, for good measure… great press for Smoke Meat Pete’s…

I’ve seen smoked meat spots in the US, but admittedly have not tried it. If you’ve had smoked meat, in Montreal, or elsewhere, did you enjoy it? How do you think it stacks up to US style deli meat? Please comment below!

I returned a bit early from a mini-vacation in Ohio to visit family and friends over Labor Day weekend because I had business travel planned the Tuesday we returned to work. Once again, I found myself traveling with a wonderful coworker (and one who knows good food!). Loren and I established “home base” in Montreal, but hit the highway and drove (yes, I was behind the wheel that week) approximately 260 km over to Quebec City. We returned that same day, but we did take a quick drive through the downtown area. I’ve marked QC as a place to which I’d like to return. It has a very European feel to it – so much charm in the architecture! I’d love to take a long weekend sometime and really explore the city.

During our only proper evening in Montreal, my coworker chose to take me to a local French Cafe, Le Tire Bouchon. You can see from the images on the website that it’s a small, cute cafe. We were very warmly greeted (in French) by our server, Alexandra. She acted both as hostess and our server that evening.

After reviewing the French menus, Loren politely requested English menus. With he and I in this French-speaking city, it was the blind leading the blind, so to speak! We were ignorant Americans. But…we were polite in our ignorance! 🙂

While we were perusing the menus, we were served a delicious olive tapenade and chickpeas to snack on.

Even in English, I wasn’t certain what everything was! I did decide that if I really wanted to be adventurous, I would put my fate in Alexandra’s hands.

The way the menu works is that each entrée is served with either an appetizer or a dessert. The extent of my decision-making was: appetizer or dessert? I like this! And, for the record, I chose to have an appetizer and an entrée.

When I explained that I would have her choose for me, Alexandra’s eyes went wide, and with a huge grin she asked “Really?” and then replied “Okay!”  Her response made me even more excited for the wonderful food I was sure would be served up that evening.

I did lead Alexandra down a path, inadvertently, by choosing to have a glass of Malbec with dinner. It was actually a bit of a destined gesture, as she and I apparently have very similar tastes – in both wine and food!

I was first served this gorgeous plate: 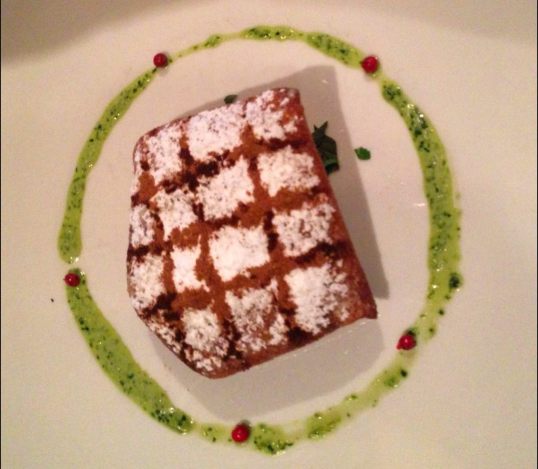 My description is simply not going to do this dish justice, but here it is:  Chicken Pastilla is a meat-pie of sorts, topped with cinnamon and powdered sugar and served with a cilantro sauce.  The baked crust was light and crisp, with the chicken being tender and tasty.  The sweetness on top complimented the salty interior very nicely.  I had never had chicken Pastilla before, so I’m really glad Alexandra chose it.  I also felt like I had won the “appetizer or dessert?” dilemma, because this dish actually tasted like a little of both!

As she dropped off “a hint” about my entrée, Alexandra informed me that the Pastilla is her favorite appetizer.

It’s also a very popular Moroccan dish. You can check out this short video if you’d like to learn more about it!

She had also shared her own serving adventure with the other servers that evening – two of whom stopped by to acknowledge Alexandra’s great choices!  Speaking of great choices…here is the entrée I was served:

It’s braised pork cheek, prepared Milanese-style, and served over saffron risotto.  IT MELTED IN MY MOUTH!!  Of course, the cheek is going to be tender, but this was simply amazing!  The tomato-based sauce was light and complimented both the pork and the risotto nicely.  The slivers of cheese gave just enough of a “bite” to the flavor, and offset the flavor of the arugula.  It was a perfect combination!  Alexandra told me that she chose these two meals because I had ordered her favorite wine (a robust red), and she likes the juxtaposition of flavors (e.g. salty and sweet).  She was taking a gamble that I would have similar taste.  She was spot on with her gamble!

It appears that I liked my entrée!

As much as I’m sure I would have completely enjoyed any dessert Le Tire Bouchon would prepare, I politely declined.

Friends, this was one of the more fun experiences I’ve had recently, for several reasons.  1) I didn’t recognize much on the menu – much of it would be new to me.  2) My coworker knows how I operate at the dinner table and he is very supportive of my indecisiveness (and the blog!), and 3) Alexandra was “all in” from the get-go, making it really fun!

Seeing the other servers have fun with this adventure was nice as well.  They’d come to the table and say something like “I’m told I need to explain your dish to you”,  or just swing by and share that I was trying one of their favorite dishes too.  How can one not enjoy an engaged and passionate staff like that!?!?

I hope you all enjoyed my latest little adventure.  I hope to have more fun like this when I’m in Brussels and Paris in a few weeks.