Archive for the tag “Charlotte”

A Girls’ Weekend that Always Centers Around the Guys…

This past weekend, I was fortunate enough to travel to Greenville/Spartanburg to meet up with some of my favorite ladies (and men) for our annual trek to Dabo Swinney’s Ladies’ Football Clinic. Y’all, this is not a “tell me what 3rd down means” football clinic. This is a gathering of 1000+ women with pretty high football IQs (well, most of them know the sport!). The coaching staff is generally quite impressed with the passion for: coaches, players, hometown heroes, and the sport, as well as the knowledge demonstrated through the intelligent questions being asked.

They are equally (okay, probably more so) entertained by the giddy “teenage girliness” that is evident in every session of the “locker room visit”. Some of the women are downright inappropriate (I’m nodding your way – woman who shoved dollar bills in Adam Humphries waistband – with a phone number on one! Incidentally, the money was PROMPTLY returned so as not to violate any NCAA regulations!)

CW from upper left: Kathleen Swinney and Ali Rogers, Kesley and me, 2013 “All In” token, and Mama Watkins (left), me, and Mama Boyd – all very lovely ladies! 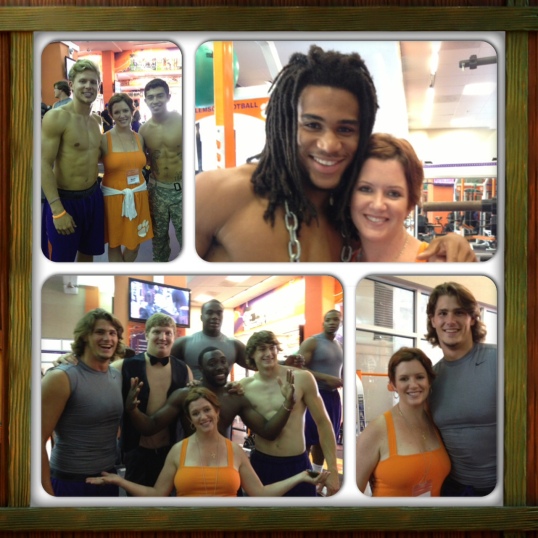 The Ladies’ Clinic is a fundraiser (in its fifth year with Dabo, and twelfth year overall (I believe)) to raise money toward breast cancer research. That’s a cause near and dear to my heart, as well as to the Swinney family. 25% of the registration fee goes toward research (and is matched by Dabo’s All-In Team Foundation) and tens of thousands of dollars are raised through silent and live auction items such as a ride-along with the team from the hotel to the game, participation in Tiger Walk, and tickets to the game ($21,000 total for 3 pairs – one donated by Coach Swinney to match the other two fan purchases), signed jerseys (Nuk Hopkins, anyone?), personally signed helmets (2 x $1,400), and many more. It was a fantastic day – as always!

But, alas…this blog is about adventures in dining – and friends – I had some!

After spending some time in my company’s Greenville manufacturing facility on Thursday, my “second family” and I went to R.J. Rockers for the Thursday night tasting tradition. I’m actually not a big beer drinker, but we always feel the need to get a “double-fisted Ker” shot – for posterity’s sake, I guess. (note: it was HOT and MUGGY that night…not a pretty sight for the chick w/ blown out naturally curly hair!)

My American Red Glare on my right, and Cindy’s Strawberry Wheat on my left.

We then headed down the street to Wild Ace in downtown Spartanburg – with a small group of friends who gathered at Rockers. I quickly made friends with the bartender while we were waiting on the rest of the group to arrive. It’s what I do. 🙂

As a result, he was kind enough to come upstairs and take care of everyone’s drink orders while we were acquainting ourselves with the menu. Wild Ace offers a lot, so I quickly gave up. I turned my fate over to our server, Devin. He started to ask a few questions, but I simply gave him the “talk to the hand” gesture – along with an encouraging smile.

When I was served my meal, I was informed that I was receiving the “Sopwith Camel” (aka: Wild Ace version of the French Dip). The sandwich was fine. I wouldn’t say it was any better or any worse than any other French Dip I have had, but it was good. It was served with chips, which were actually quite tasty (maybe because I had already had the equivalent of three beers at that point, and salty food just tasted good! But, I do think the chips were good stuff). 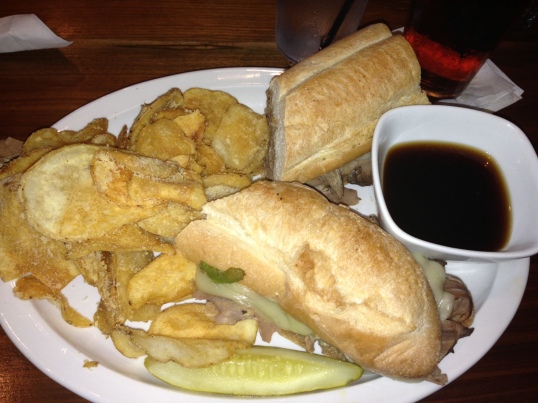 On Friday, Cindy, Kesley and I were determined to meet two of our favorite Clemson men in Charlotte for lunch. A mere 90 minutes away, give or take! We met the guys at Duckworths in Ballantyne. We arrived shortly before the guys did (after we amended the meeting time because we were running late!), so we started with some Buffalo bleu cheese chips (OMG!)

We were meeting my friends Anthony and Daniel, who both work in the Charlotte area. I first met Ant several years ago. I’ve lost count now how many years ago that was. He’s the sweetest, most charming guy – but he bucks that description every chance he gets! He has hash-tagged himself the #LargeAngryBlackMan on Twitter (it’s a joke, y’all…look at that smile!).

And, Daniel…well, he and I met through the Clemson Twitter fam as well, but we had a real-life connection as well! One of my most dear friends, Chanda, grew up with Daniel in Orange County, CA! It is indeed a small world, folks! I dug this man since the minute I met him. And…he’s a proud member of the #FKC (Fat Kid Club). See how excited he is about food? (sadly, I went the other way…from skinny kid to not-so much…but we’re both still happy!)

Both Daniel and Ant were very excited to see my indecisiveness play out in real life. When our server, Sandy, came by to take orders, I simply let her know that everything on the menu was fair game, and that she should choose her favorite lunch item for me. She was a little panicked, but ultimately agreed to order for me.

When she came back, she informed me that she had chosen the Fajita Chicken Philly (marinated fajita chicken served on a Philly roll with cheese, peppers and onions). 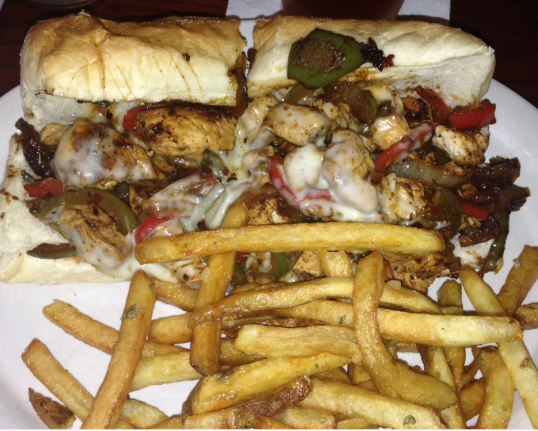 It had great flavor, but it was HUGE! I knew that I could count on Ant to finish the leftovers, and he did. With a smile! After a nice, long lunch, we headed out in different directions. It was so nice to see the guys though!

Daniel, Cindy, Kesley, Ker, and Ant at lunch at Duckworth’s.

Later that evening, we were meeting another favorite Clemson friend, beat writer Greg, for dinner in downtown Greenville (one of my favorite cities in America!). Greg chose Nose Dive (a Table 301 restaurant – of Soby’s fame (the place I had my graduation dinner so many years ago)). Nose Dive is a newer Gastropub, with an inspired menu! Again, everything looked fantastic, so I just turned my order over to Brian, our server. I let him know early on that I’d have him choose my meal, and that I would like a glass of white wine to pair with it.

Brian was totally game. I could tell he was really considering what to bring me, but he wasn’t worried when I gave him carte blanche. He first came back with a glass of Pinot Grigio – which was nice and refreshing since I had asked my friends to sit on the hot and muggy patio! 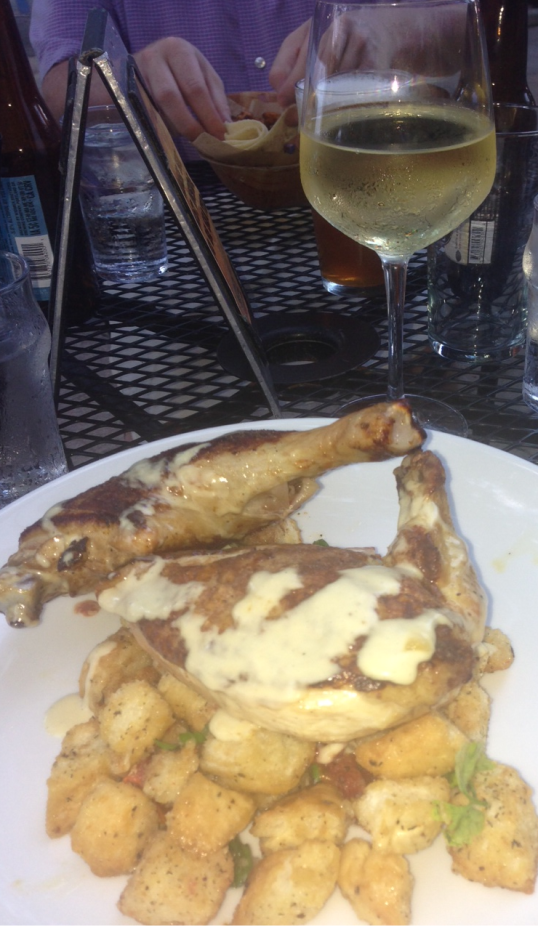 Then, he brought the Roast Chicken which was really half of a chicken served over a bed of croutons and tomatoes (yummy!) and topped with herbs and Dijon sauce. The portion was ridiculous, so half of it went home for Cindy’s daughter (who is a gymnast with a never-ending appetite!). The half that I did eat was delicious! The chicken was so moist and tender, and the herbs and Dijon were perfect accents. Although there wasn’t much in the way of “healthy” sides (I love veggies!), the crouton salad was very tasty!

I’d definitely go back to Nose Dive (although Greenville has so many good restaurants to choose from!). It was great spending time with Greg too (whom we’d also briefly meet up with after the clinic on Saturday – and whom I neglected to take a picture of! Shame on me.)

Saturday, we hit the road nice and early to make it to the clinic, and then just took it easy that evening. We hit up Thai Taste, with Daniel, his wife Kate, and their baby girl, Ella. She is, incidentally, the only child I’ve held in a long time who did not cry! She must be the perfect baby! 🙂 And, she’s stinking cute too!

It was so nice to get down south again, spend quality time with several friends, and have a bit of southern cookin’! What’s your favorite taste of the south?