Brief disclaimer: I do know the difference between “peak” and “peek”.  I’ve been a bit foggy-brained this past week since laying my baby boy Riley (my 14+ year-old Golden) to rest last week.  Massive editorial error in the initial draft – sorry for that, folks!

I was invited by friends at Next Act Theatre to attend a pre-opening dinner at the new Merriment Social restaurant in the Fifth Ward (between the Historic Third Ward and Walker’s Point).  Most recently, the space used to be Prodigal Gastropub.

The space has been renovated to provide a cool and energetic vibe.  Where there used to be a wall separating the main restaurant from “The Bourbon Room”, the entire restaurant has opened up, creating a light and inviting space.  The open floor plan provides great views, but also generates quite a buzz (it’s not a quiet spot)!  Here are a few shots of the interior. 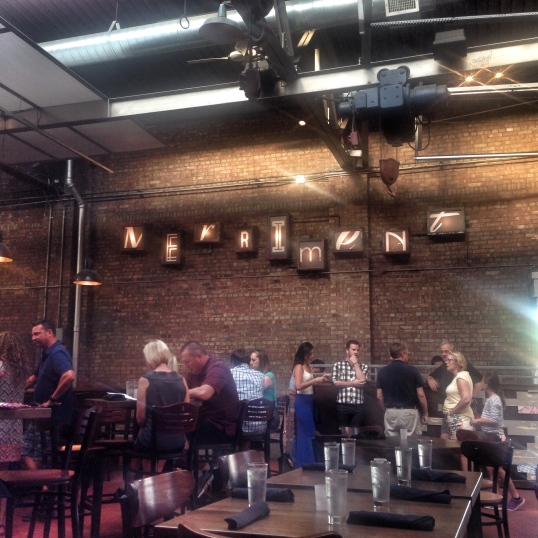 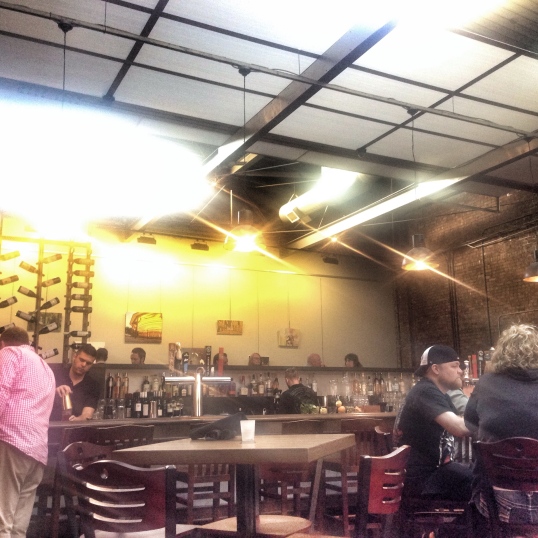 The opened up space. 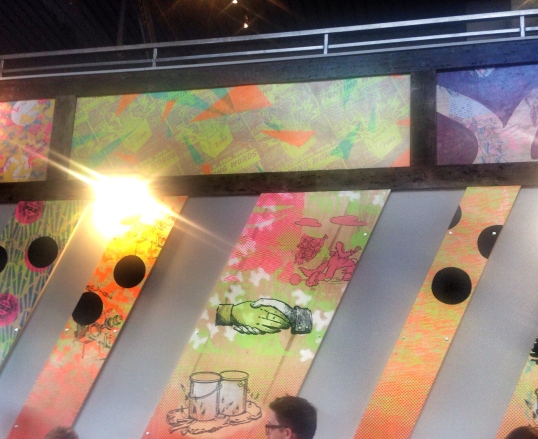 Bright, colorful art hangs all around the restaurant.

The restaurant was introduced to me as an “American Dim Sum” experience.  What???  Well, sure enough, servers were circling the tables offering dim sum plates (which we devoured before I took pictures!).  Spicy cheese curds, scallops, roasted corn… I didn’t try the scallops, because, well, you know…but everything else was quite tasty and my friends enjoyed the scallops as well.

Marko was our server, and he was friendly, explained everything quickly and easily, and informed us that both the bone marrow (one of my favorite things!) and the short ribs (another fave) were no longer available (sold out).  It was a bummer, but that’s part of the reason for a soft-opening, right?  Working out the kinks before the massive crowds come piling in.

Here is the dinner menu (I noticed I accidentally cut of the braised beef short rib with herb spaetzle, horseradish gastrique and caraway pickles and the red rainbow trout with dill potato “salad”, pickled mustard seed and charred shallot vinaigrette under the “large plates”): 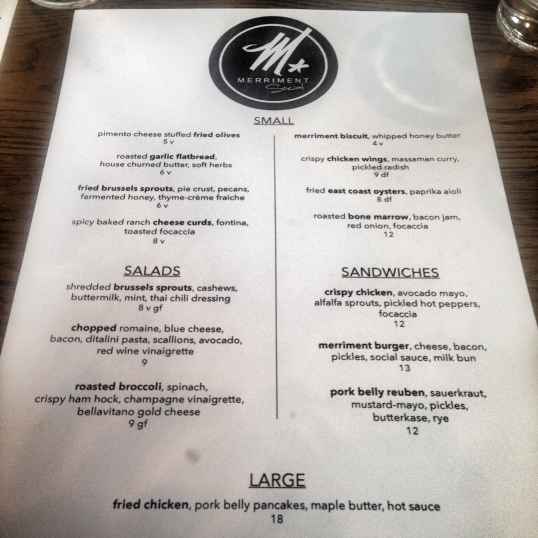 I did hand Marko my blog card, and he was totally game.  In the meantime, my friend is wired like I am…the more cheese, the better.  So, she ordered the cheese curds – which were served in a cheese sauce!  Wow!  That was a bit rich, even for me.  But, also one very good bite! 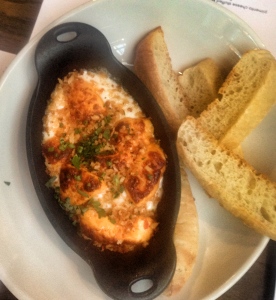 Cheese on top of cheese!

When our main dishes were served, the first one up was fried chicken and pork belly pancakes.  When my table mates couldn’t claim the dish, we figured out that Marko had chosen the dish for me.  He read the card and served traditional butter instead of maple butter – THANK YOU, MARKO!!! 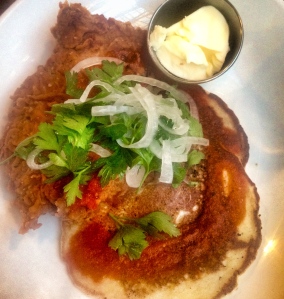 He also mentioned that he had almost gone with the trout, but wasn’t sure if I just didn’t like scallops, or didn’t like seafood in general (it’s the former – an allergy).  This fried chicken had a great crust over a really moist piece of chicken.  Good flavor as well.  And, the pork belly pancakes with the hot sauce over them made for a great pairing.  I loved this dish!  I’m happy to say that I have half of the serving at home to enjoy tomorrow.  🙂 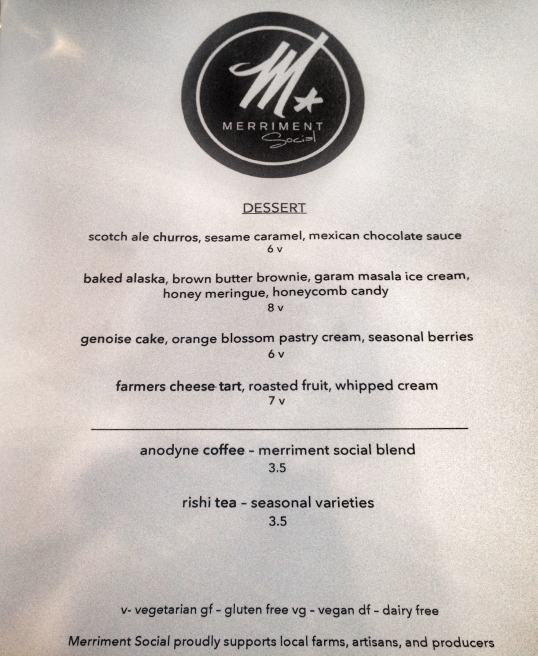 Becky and I decided we would try dessert as well.  There was a genoise cake with orange blossom pastry cream and seasonal berries on the menu. Y’all know I don’t turn down citrus desserts! 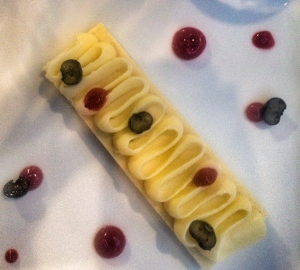 And, Becky the farmer’s cheese tart with roasted fruit and whipped cream. 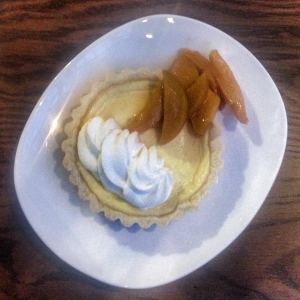 The desserts were the two lackluster items of the evening.  They were good, but I felt that the cake was a bit dry in my dessert, and Becky felt that the cheese made her tart a bit too salty.

In all, we all agreed that we will be back to Merriment Social, especially since it’s so close to Next Act Theatre as well!  I can see myself stopping in after board meetings and performances on a regular basis.  It’s also nice to invite another restaurant to the neighborhood that supports local farmers, artisans and producers.

One last note, the prices are reasonably priced and in line with many of the restaurants with which I would categorize Merriment Social.  Last night, however, the meal was “on the house” and we only paid for our drinks – and a proper tip to Marko for his excellent and attentive service throughout the night.

Merriment Social officially opens Friday August 7, 2015. You  can call 414.645.0240 for reservations.  I hope y’all will give it a try and leave a comment with your thoughts!