I’ve been in Brussels, Belgium since Sunday morning.  The trip got off to a rocky start (our company’s IT team forgot to grant me international phone access, thus causing me to miss connecting with a coworker for a ride from the airport to the hotel, cars were banned from Brussels for “sustainability day”, my room was not ready for five hours after I arrived to the hotel, etc.), yet, the trip has been a good one!

On Sunday afternoon, I did meet up with my coworker, Loren, and he and I set out to explore the city.  First stop?  Belgian waffles, of course! Actually, it was Belgian “waffle”, singular.  Loren and I split a traditional waffle with powdered sugar and cinnamon.  I have to admit that the waffles topped with some combination of Nutella, whipped cream, strawberries, and nuts did look decadent, but I preferred the simple sugar and cinnamon version. 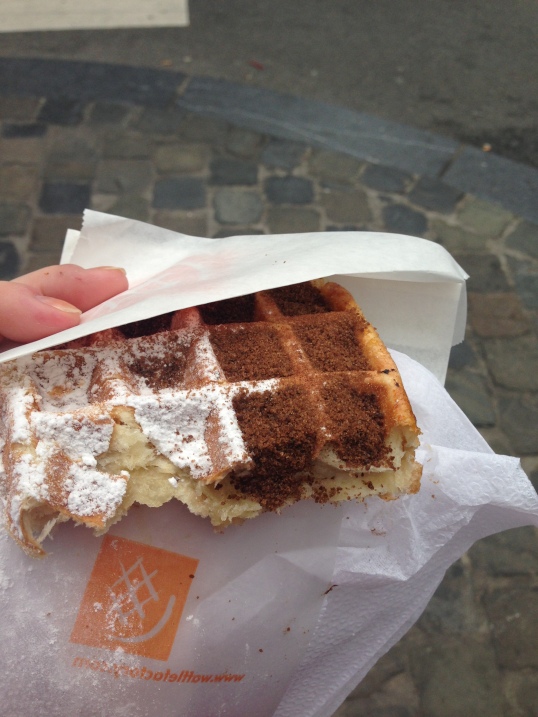 Once we continued on our way, we headed to the most popular place (at least with everyone I’ve spoken with) – The Grand Place.  Because of “Sustainability Day”, the plaza was quite full – of both energy and people!  Much more so than usual.  It was a bit hectic, but it was also quite beautiful.

I had asked my Loren if we could have a beer (it is Belgium, after all!) and toast to my friend Erica, who passed away two years ago and who would have been 32 years old on Saturday (while I was flying across the Atlantic).  So, we sat in The Grand Place and had a toast to my friend.  It was lovely of Loren to oblige me – that’s the kind of guy he is.

Cheers to Erica! Miss that angel…

After enjoying a leisurely beer in the plaza, we set out to find a place to have dinner.  Loren was craving mussels (and I’ll never turn down mussels!), so we found ourselves wandering around the area adjacent to the plaza while trying to find a good place for mussels. We ultimately ended up asking two young men where the best place for mussels is and, at their suggestion, made our way to Chez Leon.

Friends, I LOVE seafood, and especially mussels!  So, I was quite happy with the menu options.  I asked our server, Atia, to bring me his favorite mussels on the menu.  He didn’t even hesitate.

Turns out, he favors Moules Poulette (mussels with mushrooms, scallions, and cream sauce).  The mussels were delicious (perfectly cooked!), and the cream sauce was light and flavorful.  I had no trouble sucking down a pot full of mussels!  In Belgium, mussels are always served with ‘frites’ (French Fries), which I could take or leave.  Knowing that it’s a Belgian tradition, I ‘ took’ them this time!

Also, if you weren’t aware (and I wasn’t), there is apparently a “pro tip” to eating mussels.  Use one shell as your utensil to pull a mussel from another shell and slurp it down!  See how Loren demonstrates this technique? 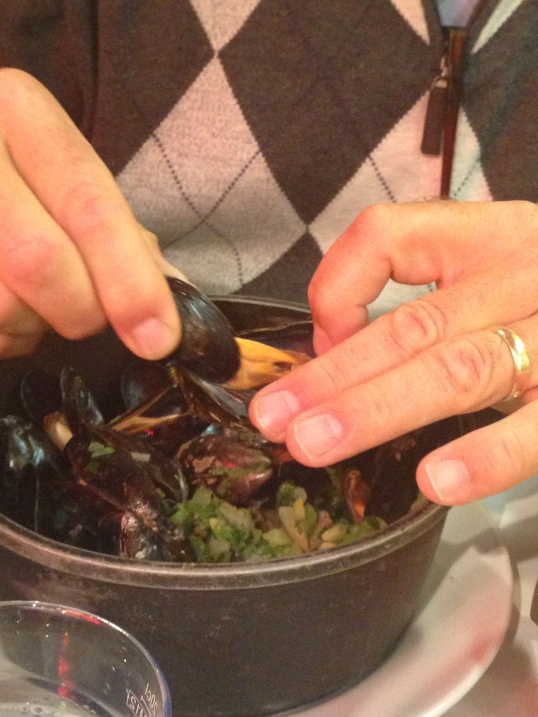 After dinner, later that evening, I emailed another coworker, whom I mentioned here, about The Grand Place and Chez Leon.  He and his family are going to be in Brussels next weekend, so I promised him I would provide recommendations if I found anything worth seeing/doing.  Chez Leon, in my opinion, is worth stopping by (if you like mussels).

And, funny enough, Loren and I ended up taking a customer, his wife, and one of our Parisian colleagues (Benoit) to dinner on Monday evening.  After striking out a couple of times at restaurants along the way, at Benoit’s suggestion, we ended up back at Chez Leon.  While I thought it was a bit of a bummer that we had dinner at the same place two nights in a row, at least it was a good restaurant!

This time, I ordered the Moules Provencale (mussels with butter, garlic, tomatoes, and cheese).  The mussels were served on the half shell, and were broiled to bake the cheese on top. 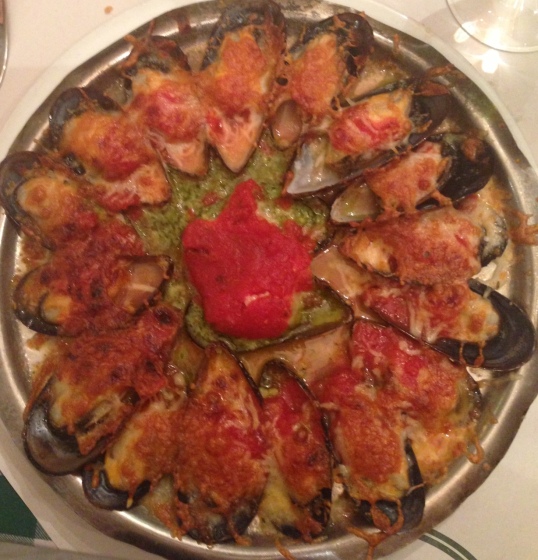 This made them seem a bit overcooked and chewy.  Not at all terrible, but not as delicious as the mussels I had the prior evening.  Although I love cheese, I think I’ll stick to traditional steamed mussels from here on out.

On Tuesday evening, I met up with a friend of mine, Tina, who is now living in the Netherlands. 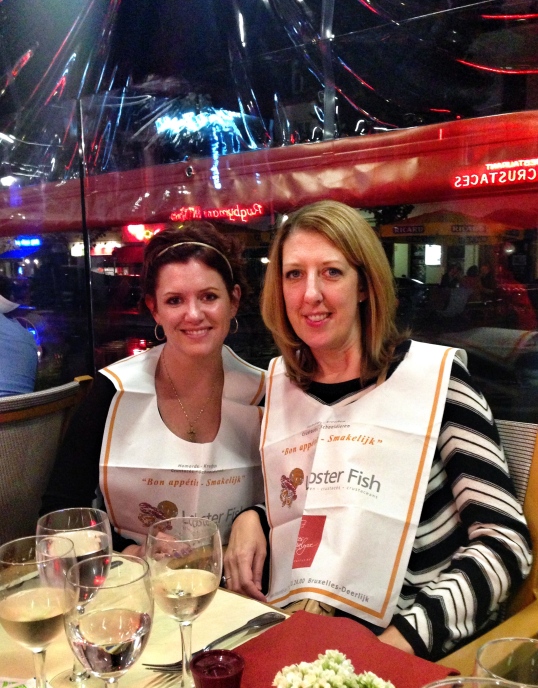 Tina, one of my favorite people – funny, smart and beautiful! Oh, but she moved to the Netherlands. 😦

We always wear bibs when we’re together. 🙂

Just teasing…we donned the bibs for our photo-op, and for the forthcoming lobster dishes we were awaiting.

It was a joy to be able to grab dinner with her and her current coworkers!  We walked past the Nord Station (train station north) and over to The Rugbyman restaurant – situated on a small spot of water.  We sat outside and enjoyed the evening in Brussels.  Tina and I both ordered a preset menu of scampi (in garlic butter – SO WONDERFUL!), half of a lobster (her’s with cream and vegetables, and mine cold), and dessert.

We both opted for Crème Brûlée over chocolate mousse – and cleaned our dishes!

As good as the food was, even as the lobsters were quite difficult to eat (we looked like “stupid Americans”!), what made the evening grand was being reunited with my friend again.  We both traveled from another country to meet up in Belgium for dinner.  How cool is that?!?

Now, I’m on a train and on my way to Paris for two evenings before heading back to the States.  I believe I’ll be on my own for dinners, so we’ll see what happens there!

Language barrier or not, there is almost certain to be a “She Ordered What?” in my near-term future!